From June 20 to July 14, Powerhouse Moscow, a space mixing nightclub, bar and restaurant, hosted a Brazilian invasion with shows and gastronomic activities that were part of the Brasil Music Club’s agenda during the World Cup. The program is organized by Brasil, Música & Artes (BM&A) in partnership with the Ministry of Culture and the Brazilian Trade and Investment Promotion Agency (Apex-Brasil) through the Brasil Music Exchange (BME).

In the audience, important names in the music, fashion and arts industry, both in the country of the Cup and Brazil, such as: Henri Castelli, Brazilian actor; Alex Nikolaev, founder of Insimple, music business school; Rita Sukhareva, fashion designer; Gleb Lisichkin, journalist, producer and founder of Kometa Music; Dmitry Shumilov, composer and Vezhlivyi Otkaz band leader; Dasha Kashirina, actress, model and producer; Cyril Moshkow, jazz journalist, founder of jazz.ru; Tomylo Rita, producer and model; Priscilla Chigariro-Gessen, founder of Zimbabwe Fashion Week; Andrey Galperovich, founder of Powerhouse and director of Moscow Music Week; Stepan Kazaryan, founder of the booking agency Connected Booking and director of Moscow Music Week, and Elena Moiseenko, musical director of the Usadba Jazz Festival. In addition to the crowded audience, the shows were also transmitted by streaming and released on social networks, expanding their reach to about 2 million people, being 50% in Russia.

“The project surprised us positively, because we managed to introduce our music to a qualified audience that has great admiration for Brazil. We will certainly be back with activities in Russia soon. Furthermore, we provided the possibility for almost all the artists of our line-up to tour around Europe, passing through countries such as England, France, Switzerland, Portugal and Spain, as well as Russia itself. Hermeto Pascoal, for example, performed at the Jazz à Vienne, Copenhagen Jazz Festival and Worldwide Festival, and Mart’nália passed through the Montreux Jazz Festival”, explains the chairman of the BM&A, Sérgio Ajzenberg.

In every day of the program, Powerhouse also hosted a lounge dedicated to the Ministry of Culture with information about the lineup artists, video about the creative economy in Brazil, releases and materials to promote the Brazilian culture.

The rapper from São Paulo, Emicida, opened the programming on June 20, followed by the instrumental group led by the 7-string guitarist, composer and arranger Gian Correa on the 22nd. Sunday (23) was dedicated to Northeast of Brazil: the programming started at 3pm with Chef Guga Rocha, who prepared a tropical fish with mango vinagrete (oil and vinegar with chopped pieces of tomato and onion), coconut rice and banana farofa (toasted manioc flour). The band Selvagens à Procura da Lei, from Fortaleza city, was in charge of the sound. The Chef, who has experience in more than 30 countries, was delighted with the Powerhouse structure. “We prepared the fish in the barbecue, more Brazilian than that impossible”, he commented, who took the opportunity to show a little bit of Luiz Gonzaga with the band.

On 28 and 29, Ludere and Esdras Nogueira and group composed the programming, followed by the legendary multi-instrumentalist Hermeto Pascoal on July 2, who playing for the first time in Russia attracted a lot of local fans.

On Tuesday (3), it was the time for Rio de Janeiro samba with Mart’nália. “It was a very positive experience, I loved coming to Russia and I found the people very kind. I think the role of samba is exactly that of union, and that’s what happened here. The place also has an incredible vibe and transmits great energy to everyone present”, said the artist.

In addition to performing on the main stage on July 6, the samba band Sandália de Prata played for the audience in Red Square on the 7th, inside FIFA Football Park. Saulo Duarte, who took the stage on July 13, also performed an extra show at Powerhouse itself on the 12th, when he performed at an event of a big Brazilian brand.

The exchange with Russia also happened on the stage when the local duo Pedro y Juan opened the programming of Yangos group on July 8. The quartet is known for working regional Gaucho music in a contemporary way, having performed in Latin America, the United States and Europe. To accompanying the afternoon of tributes to the South Region, the chef from Florianópolis Alysson Muller prepared a typical menu: barbecue on the stick with arroz de carreteiro (a mixture of rice, beef jerky and onions prepared in one of many stops made by cattle drovers on the road) and farofa (toasted manioc flour).

“The show was amazing, the audience got engaged. It is very important to be here today presenting to people of the world all the music of Rio Grande do Sul, which is always our main objective. This visit to Russia also allowed us to tour in Portugal”, says keyboardist César Casara. On the same day, the Samba Real school, formed only by Russians, showed a little bit of its very Brazilian samba.

On June 10, the tastes and sounds of the North Region counted on the duo Combo Cordeiro and a menu with typical Amazon ingredients prepared by chef Felipe Schaedler, coming directly from Manaus: Tucupi (a yellow sauce extracted from wild manioc roots) rice with chestnut, red peppers, tomatoes and shrimp braised with herbs.

And, to top it all off, on the 14th there was a show by the São Paulo musician Curumin, and a moqueca capixaba (a Brazilian recipe native to Espírito Santo state, based on salt water fish stew, tomatoes, onions, garlic and coriander slowly cooked, optionally served with prawns, and includes by preference a mix of boneless fish species, like small shark, swordfish, etc.) prepared by chef Guga, who had the challenge of using a typical Russian pot, the Kazan.  “This encounter is very interesting, because we see that they start shy and throughout the show they start loosening themselves. This exchange is very important for us musicians”, commented Curumin.

Check out the full programming held in Moscow:

See some photos below: 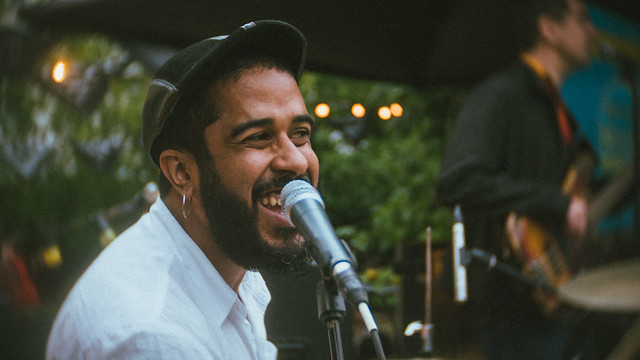 To see all the photos of Brasil Music Club, click here.